The memorial site lies on the outskirts of the village of Ostrozhets. It was built in September 2013 and dedicated in late June 2015.

The history of Ostrozhets dates to 1528, with the first references to Jews following before the turn of the century. The village was located in Poland until the final partition of Poland in 1795, when it fell to the Russian Empire. The village once again became a part of Poland after the Polish-Soviet War in 1921.

According to the 1921 Polish census, three adjoining communities used the name Ostrozhets: a Polish estate, a Ukrainian village, and a Jewish shtetl. The Jewish community in Ostrozhets numbered 630 persons at that time. By 1939, the community likely exceeded 700 persons.

Most Jews worked as small businessmen or craftsmen; about a third worked in agriculture. The Jewish community was home to a main synagogue and two Hasidic prayer houses, one affiliated with the dynasty in Olyka and the other with the dynasty in Turiisk. Various Zionist groups seeking to prepare Jews for emigration to Palestine were active in Ostrozhets. Among the Zionists, the labor movement enjoyed by far the greatest popularity, while the General Zionists found only little support.

After the German-Soviet invasion of Poland in September 1939, Ostrozhets became part of the Soviet Union. The new authorities curtailed religious practice, banned Zionist activity, and expropriated private property and businesses. 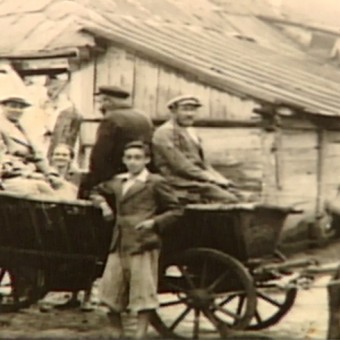 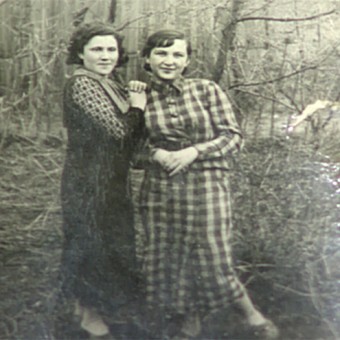 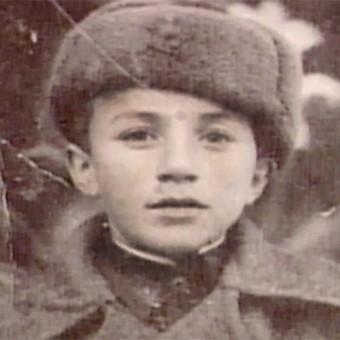 Ostrozhets was occupied by the Germans on June 26, 1941, just days after the German attack on the Soviet Union. Jews had to hand over valuables, provide forced labor, submit to curfew, and wear identifying armbands (later patches). In August 1941, 40 Jews were shot. In April 1942, the authorities ordered the establishment of a ghetto. The remaining Jews of Torhovytsia, located 16 km to the southwest, were also relocated to the Ostrozhets ghetto around the same time.

Approximately 800 Jewish men, women, and children were murdered outside Ostrozhets on October 9, 1942. Beforehand, the Germans had local non-Jews dig a pit next to the Jewish cemetery. The ghetto inhabitants were driven by truck under German and Ukrainian police supervision to the pit and shot.

Prior to the mass shooting, scores of Jews had fled the ghetto upon hearing about the digging at the Jewish cemetery. Most of them were also tracked down and shot on sight or taken to the cemetery to be killed.

Rescue efforts on the part of the non-Jewish population were seldom. Two brothers, both Ukrainian Baptists, hid ten Jews from Ostrozhets in the village of Maly Dorostai. All of them survived the war. Another Jewish woman wandered the countryside for a year before finding somebody, a Ukrainian woman, to shelter her for the last seven months of the German occupation.

Jews trying to escape the Germans also had to elude anti-Semitic elements of the partisan movements operating in Volhynia.

Fewer than 20 Jews from Ostrozhets are documented as surviving the German occupation.

After the war, nothing in Ostrozhets recalled the victims of the Holocaust. A road was built through the terrain, possibly destroying a part of at least one mass grave. Another section was used for agriculture. The killing site was largely forgotten.

In September 2013, work began to transform the mass graves and former Jewish cemetery into a memorial site. Damage caused by erosion and plundering prevents an exact demarcation of the mass graves here.

A total surface area of 3,800 square meters has been surrounded by wooden fencing. The mass graves are covered with black-grey granite stones. A seating area invites the visitor to contemplate the life and fate of the Jewish community in Ostrozhets, which is described on a nearby historical marker.

The simplicity of this memorial site stands for the incomprehensible crime that took place here. Especially unsettling are the road that was built through this site and the proximity of the killing site to the town itself. The cemetery borders on the last houses in Ostrozhets.

The slope on which this site is located was a source of complications during work on the site. A dirt road along the base of the terrain had to be cleared of earth that had slid off the hill. It was also necessary to prevent any further movement of the cemetery surface down the hillside.

The memorial in Ostrozhets was designed by contractor Volodymyr Motyka.

From Lutsk, take E 85/M 19 southeast toward Mlyniv or Dubno. After about 15 km, turn left at Velyka Horodnytsia to Ostrozhets. After about 3 km, you will have reached the center of Ostrozhets.

From there, turn right and, after about 500 meters, right again to the west. The memorial site is located on the right-hand side of the road.